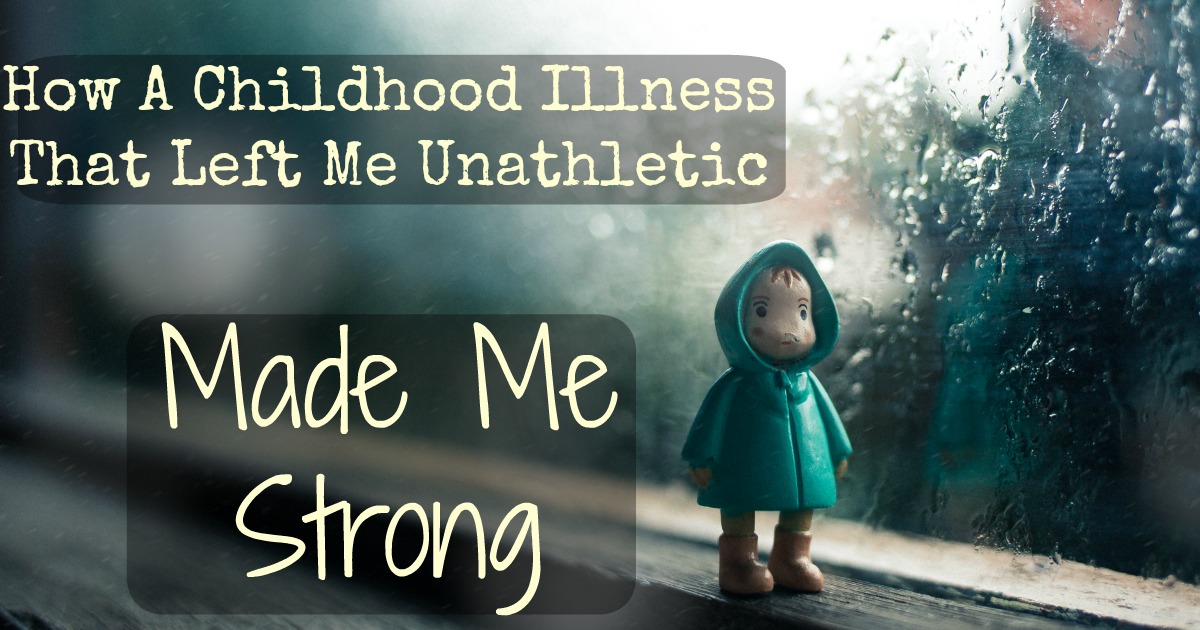 Let’s travel back to the later 1900s. A time when most kids still had gym class every day and where children didn’t have as many electronics so they’d go out and play. And where being unathletic meant you had to struggle daily to not look like a ridiculous fool. This is where my story begins

The start of my unathletic journey

But first a little history about me. So when I was four years old, I had a rare illness. Like SUPER rare. My parents took me to one of the top pediatric neurology hospitals in the country (Boston Children’s Hospital) and I was only the 12th kid  in that hospital EVER treated with this illness.

When I arrived at the hospital, they thought I had a scary brain tumor. But low and behold, I actually had a cyst in one of the few places where it can actually kill you. It blew up  like a water balloon, pushed against my brain and was primed to push my brain right out of my head.

By the time I left the hospital, I had also survived meningitis. One of the hazards of being in a germ filled hospital. And I was so weak. So incredibly weak. Like I would get locked in rooms if nobody was present to open the door for me. And I certainly couldn’t run, climb and play like other kids. It was recommended I go into physical therapy, but that never happened. Long story.

As a kid, I didn’t shy away from sports. At age 7 and 8, I was the only girl on an all boy’s soccer team. At age 9 and 10, I played extracurricular softball. By age 11, I had started taking dance. At age 13, I started going to tennis camp. But there was one thing that I had in common with all these sports. I sucked.

And practice did not make perfect.  Gaining strength was painfully slow.  I’ve had to work my ass of to be able to do athletic things that others take for granted. And this has been my entire life.

So that brings me to my unathletic runner’s journey

Running was always a source of utter embarrassment. Think of this. There are the athletic kids running up front. Then you was the so-so athletes behind them. And then you have the unathletic kids lagging from behind. These are the kids normally picked last on sports teams.

As a young adult, I would be huffing and puffing at about a quarter mile run. I walked about 6 miles a day (living in NYC) but somehow a quarter mile run would wind me. I was such a bad runner that I felt self-conscious running across the street, trying to avoid the speeding cars from smashing into me. Vanity before safety, right?

Running had become my arch nemesis. And for some time, I avoided anything that sounded like it involved running. Running just wasn’t for me.

But it occurred to me a few years ago that this avoidance of running was allowing me to keep running from myself (no pun intended.) And part of freeing myself from my past was to train until I could run.

I started  on the treadmill. Ah, that day not SOOO long ago when I cranked the treadmill to 4.8 miles per hour (barely a jog.) But I was able to run for 20 minutes straight. Which might sound like nothing to the average person who has lived with normal athletic abilities. But for me that was astounding.

I moved to faster speeds on the treadmill, to running to outdoors to now doing half of my just shy of 3 mile run straight uphill. And am I a rock-star runner? Well, no.

I imagine I look a bit clumsy. But maybe that’s all in my head. But at the end of the day, that doesn’t matter. Because I didn’t start where the average person starts. I have my own unique journey. And I set the definition of my own success.

The lesson I couldn’t have learned any other way

I could have spent my life defining myself by all the pain I faced having to accept physical limitations. But I decided that was a horrible way to live. It’s easy to spend life in your comfort zone. And it might feel great when people tell you how good you are at the things in which you naturally excel. But I believe true value comes from doing the things that people won’t oooh and ahhh at you for.

I imagine I’ll still never understand why my illness led to such physical difficulties. But I choose to consider it a gift. I’ve got a shit load of determination. And much of this I developed overcoming physical obstacles. Yup, I’ve had to flex my determination muscle pretty regularly.

Make your own story

So whatever might be your story, it doesn’t define you. Things might come easier for someone else. Another person might have had an easier life. You might not become THE BEST at whatever has held you back.But that doesn’t mean the journey isn’t for you. In fact, I believe that’s exactly why you should take the journey.

Don’t hide from your own struggles. Get ready to jump in. Because the sweetest type of success comes from a victory over your own self-perceived limitations.

Get Saucy! Give Your Health A Huge Boost With These Sauces!
7 Natural Ways To Keep Your Skin Young